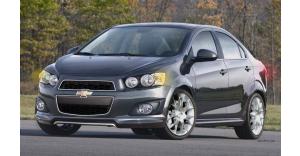 Chevrolet has recently revealed that the 2014 version of the Sonic will get more advanced-safety features so as to further ensure that the vehicle will be able to protect its occupants in the event of crash or collision.

Based on the information that Chevrolet has provided in press release which is dated September 9, 2013 and published in the brand’s media site, the 2014 Chevrolet Sonic is now equipped with more advanced-safety features such as the Lane Departure Warning, Forward Collision Alert and a rear-vision camera.

The same press release also revealed that when the Forward Collision Alert used on the 2014 Sonic is activated, the feature is designed to provide a warning to the driver in the event that they are approaching to another vehicle in front at a faster speed. Once the warning is given, the driver will most likely decrease the Sonic’s speed and adjust the vehicle’s distance with the one which is in front. Thus, this particular function is deemed important since this could help prevent the occurrence of a frontal collision.

In addition to that, the press release also explained that the 2014 Chevrolet Sonic becomes more safer since this is now equipped with the Lane Departure Warning. The main function of this feature according to Chevrolet is to warn the driver of the Sonic in the event that the system sees that this veering away from the designated marked roadway lane. Given such warning, the driver would be reminded that the vehicle needs to be steered in the correct lane. Thus, this helps prevent any collision from other vehicles.

The rear-vision camera on the other hand provides the driver of the Sonic with a clearer vision of all the stationary objects that are located behind. The images obtained by the camera are displayed on a 7-inch digital touch-screen which is included on the Chevrolet MyLink feature.

Given such improvements in the safety features of the 2014 Chevrolet Sonic, a lot of car experts firmly believe that Chevrolet is very much willing in further uplifting the image of the subcompact car when it comes to occupant safety since the Sonic is considered as one of the brand’s bestselling models especially for buyers who are under 35 years of age.

DETROIT– The 2014 Chevrolet Sonic is available with even more advanced-safety features, including a rear-vision camera, Forward Collision Alert, and Lane Departure Warning.

When activated, Forward Collision Alert warns drivers if they are approaching a vehicle too quickly. Lane Departure Warning gives an alert when the vehicle veers from a marked roadway lane. The rear-vision camera, enabled by the Chevrolet MyLink’s 7-inch digital touch-screen, helps give drivers a clearer view of stationary objects behind the vehicle.

In MyLink-equipped Sonics, owners can press a button mounted on the steering wheel to initiate a voice command when a smartphone is paired. In Siri Eyes Free mode, the button allows sessions with Siri to begin and end without the phone’s screen lighting up, helping to minimize distractions.

Sonic is the first and only car in its class to receive a 5-Star Overall Vehicle Score in the New Car Assessment Program administered by the National Highway Traffic Safety Administration. The 2013 model was named a Top Safety Pick by the Insurance Institute for Highway Safety. Sonic was the first subcompact to have 10 standard airbags.

“While airbags and other passive safety technologies are indispensable, the active safety system now can help even more Sonic drivers avoid collisions from the start,” said Kim.

Sonic is one of Chevrolet’s best-selling vehicles among buyers under 35.

Developed in South Korea, the Sonic is the only subcompact built in America. It delivers 40 mpg highway with the 1.4L Turbo paired with a six-speed manual transmission available in LT or LTZ trim.

About Chevrolet
Founded in 1911 in Detroit,Chevroletis now one of the world’s largest car brands, doing business in more than 140 countries and selling more than 4.5 million cars and trucks a year. Chevrolet provides customers with fuel-efficient vehicles that feature spirited performance, expressive design, and high quality. More information on Chevrolet models can be found atwww.chevrolet.com.