Home > Car Advice > Chevrolet, Silverado > Engineers Made the Silverado the Most Corrosion-Resistant Truck

Engineers Made the Silverado the Most Corrosion-Resistant Truck 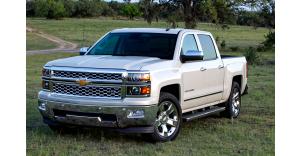 Chevrolet confirmed that the 2014 version of the Silverado is currently considered as the most corrosion-resistanttruckthat the brand has in its stable.

According to the brand, the company’sengineershave designed the 2014 version of theChevrolet Silveradoto become resistant to corrosion. This particular strategy was implemented on theChevrolet Silveradosince the company has realized that almost all of the light-dutypickuptruckmodels that are on the road right now are very prone to corrosion and this problem will most likely prevent such vehicles from providing the basic functions that the buyers expect them to provide.

In a press release that was published on its media site, the brand has briefly detailed the methods that the company’sengineershave employed in order to strengthen the protection of theChevrolet Silveradoagainst corrosion.

First off, Chevy explained that its engineers who were involved in the development of the 2014 version of theChevrolet Silveradoused zinc-coated or galvanized steel on the roof and all of the body panels of pickuptruckexcept for its hood. This is because the zinc-coated steel was proven to be corrosion resistance. In addition to that, Chevy has also made use of aluminum alloy in making the hood of thetruck. This is also viewed as a good move since aluminum alloy is also resistant to corrosion and helps reduce the vehicle’s weight.

Aside from that, theengineersalso improved the hem flange sealing on the doors and hood of the pickup. They also applied an additional amount of underbody flange sealing to keep the joints of thetruckdry and prevent these from deteriorating due to moisture.

Chevyalso revealed that its engineers used the improved and extensive protection for the chassis of the pickupso as to enhance its appearance as well as prolong the life of the components of the vehicle that are found under its body.

Finally,Chevyhas also conducted an accelerated testing of the measures that were implemented on the Silverado so as to make sure that such practices would be able to provide the expected output. Such evaluations lasted for a few months butChevyexplained that such tests are quite similar to the conditions that the pickup would be experiencing for ten years on the road.

2014 Silverado Is Most Corrosion-Resistant Chevrolet Truck

DETROIT– More than half of light-duty pick-up trucks on the road are now 11 years or older. To help build on the Chevrolet Silverado’s reputation as the most dependable, longest lasting full-size pickup, engineers designed the2014 Silveradoto be the most corrosion resistant Chevrolet truck ever.

The 2014 Silverado starts with zinc-coated (galvanized) steel for the roof and all body panels except the hood, which is made of an aluminum alloy that reduces weight and provides corrosion resistance. At every step of the design and manufacture of the new Silverado, materials and production processes were selected to help minimize deterioration over time.

“Silverado’s corrosion protection measures provide superior defense against elements in the environment, whether driving through farm fields, on construction gravel, or down a snow-covered highway,” said Mark Yergin, engineering group manager, General Motors Corrosion Engineering and Labs. “The new Silverado is our strongest truck yet, affording us the confidence that the truck will continue to meet customers’ needs throughout its life.”

Additional 2014 improvements over previous models include:

The effectiveness of these changes was borne out during extensive proving ground testing at exposure levels higher than most drivers ever experience. The months of accelerated testing these trucks undergo is equivalent to more than 10 years on the road.

Post-test evaluations of the trucks, including the search for and elimination of corrosion even on areas of parts customers never see, helps ensure the overall vehicle performance.

About Chevrolet
Founded in 1911 in Detroit,Chevroletis now one of the world’s largest car brands, doing business in more than 140 countries and selling more than 4.5 million cars and trucks a year. Chevrolet provides customers with fuel-efficient vehicles that feature spirited performance, expressive design, and high quality. More information on Chevrolet models can be found atwww.chevrolet.com.

Marty Bay is the Lead Writer and Editor for VPM Automotive. He has researched and reviewed 100s of cars, and writes extensively about car technologies.
Follow Marty Bay on Google+
This entry was posted in Chevrolet, Silverado. Bookmark the permalink.