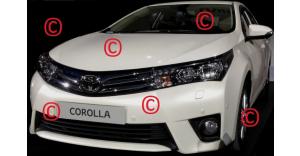 Toyota Motor Corporation has recently confirmed that the 2014 Toyota Corolla will be having its private debut next month.

Based on the information provided by the Japanese carmaker, the 2014 version of the Corolla will debut in Southern California in the earlier parts of the coming month. The carmaker has also stressed that the vehicle’s debut will be conducted as a media-only event. Toyota has also refused to provide a detailed set of information regarding the standard and optional features that the upcoming version of the Corolla would be offering.

Fortunately, a lot of automotive journalists have obtained a number of leaked information regarding the specs and the features that the upcoming version of the Toyota Corolla would probably be offering. Although the leaked details regarding the 2014 Toyota Corolla are considered by many car buyers as mere rumors, these are actually considered by a lot of car experts as useful set of information since these would help them in trying to picture out the exterior, interior and overall appearance of the upcoming version of the Toyota Corolla.

According to the leaked information, the 2014 version of the Toyota will most likely be powered by the same 1.8-liter 4-cylinder which is equipped with the continuously variable valve timing. Although the engine remains the same, a lot of car experts believe that Toyota’s engineers implemented a few upgrades on the Corolla’s engine. Due to these upgrades, the engine of the upcoming version of the Toyota Corolla is expected to generate a maximum power output of up to 150 horsepower.

The same source of information has also hinted that the 4-cylinder engine that will be used on the base version of the upcoming Toyota Corolla model will be mated to a continuously to a 4-speed automatic transmission. The upper trim levels will most likely be equipped with the continuously variable transmission while the 6-speed manual transmission will also be used on such trims.

Marty Bay is the Lead Writer and Editor for VPM Automotive. He has researched and reviewed 100s of cars, and writes extensively about car technologies.
Follow Marty Bay on Google+
This entry was posted in Car Buying Guide & Tips, Corolla, Toyota. Bookmark the permalink.