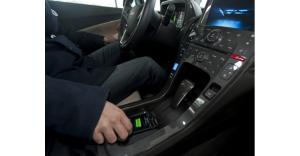 General Motors confirmed that some of its car models that bear the 2014 model year will be rolling out of the market next year and these would be equipped with the new in-car wireless charging system for smartphones.

Based on an interview with Ran Poliakine who is the current Chief Executive Officer of Powermat Technologies Ltd., the company where General Motors has invested to develop the technology, he confirmed that many of the upcoming GM car models that bear the 2014 model year will feature the in-car wireless charging system and this is expected to delight the potential buyers of such vehicles.

Poliakine explained that the in-car wireless charging system for smartphones that GM is planning to include in some of its models next year could be considered as a significant feature of such vehicles. This is because the drivers as well as the other car occupants are no longer required to plug their smartphones into cables so as to replenish the power of the batteries when the vehicle is equipped with the “Powermat.” All they need to do is just place their phones into Powermat surface and these would automatically be recharged.

Poliakine however stressed that in order for the Powermat to work, the phones that need to be recharged must be capable of recharging through a built -in technology. In addition to that, he also explained that the wireless recharging of smartphones will also work given that such gadgets are equipped with cases that were specifically designed for that particular purpose.

Given such plan, many car experts are convinced that General Motors has decided to use such technology on several of its upcoming car models since Toyota Motor Corp. which is one of the carmaker’s top competitors has already started using such feature on the 2013 Toyota Avalon.

In addition to that, Chrysler is also using such feature in some of the models of the 2013 Dodge Dart as well as on the upcoming version of the Jeep Grand Cherokee which is set to hit the market this fall.

With this technology, General Motors is quite optimistic that most of its upcoming car models would be able to cope up with the competition brought about by the continuous introduction of many in-car technologies of almost all carmakers.