Important Details of the 2015 BMW i8 Released 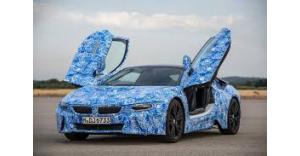 BMW has finally revealed the most important technical details of the 2015 i8 a few weeks before the plug-in hybrid sports car’s official debut which is scheduled to be held at the 2013 Frankfurt Auto Show.

BMW revealed that the 2015 i8 which is the second model of the automaker’s electric-drive lineup dubbed as the “i” and designed as a 2+2 version is set to arrive at the company’s showrooms in the earlier parts of 2014. The carmaker also stressed that the vehicle was built to compete with other competing models in the segment such as the Mercedes-Benz AMG SLS E-Cell and the Tesla Model S.

In addition to that, the German carmaker explained that the 2015 BMW i8 when it hits the showroom early next year will be equipped with company’s new 1.5-liter turbocharged 3-cylinder engine, an electric motor and the lithium-ion battery pack which is capable of producing a maximum power output of up to 362 horsepower.

BMW hinted also hinted that the gasoline engine used on the vehicle is responsible for driving the i8’s rear wheels. The electric motor on the other hand takes charge of driving the vehicle’s front wheels. The power generated by the gas engine is delivered to the rear wheels via the 6-speed automatic transmission. The power produced by the electric motor is passed to the vehicle’s front wheels through an integrated 2-stage automatic transmission. Given this design, the i8 basically comes with an all-wheel setup and is expected to be capable of accelerating from 0 to 62 miles per hour in 4.5 seconds.

With regards to the exterior qualities of the vehicle, BMW explained that the i8 will be introduced with the proportions that are common among sports cars. This is about 15.4 feet long and comes with a curb weight of 3,285 pounds. The carmaker also revealed that the i8 will feature a plastic passenger cell which is reinforced by carbon-fiber and will be using a glass which is chemically hardened and similar to those that are used in many smartphone models.

Finally, BMW confirmed that the plug-in hybrid system used on the i8 was built specifically for the model. The vehicle could also be recharged using a standard household outlet for about three hours and about two hours using a BMW i Wallbox.

Marty Bay is the Lead Writer and Editor for VPM Automotive. He has researched and reviewed 100s of cars, and writes extensively about car technologies.
Follow Marty Bay on Google+
This entry was posted in BMW, Car Technology. Bookmark the permalink.