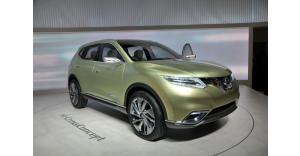 Nissan has recently closed a deal with Apple and this made the carmaker as the first automotive entity to feature Apple’s iTunes radio.

Based on the information obtained from Nissan, some of its models particularly the 2014 version of the Rogue, Versa Note and the Leaf will soon come with the Apple iTunes Radio as part of their long list of standard or optional features. The carmaker also took pride in revealing that they are currently considered as Apple’s exclusive automotive launch partner of such feature.

Nissan has also hinted that Apple’s launching of the iTunes Radio was basically designed to compete with Pandora which is considered as one of the most dominant entity when it comes to Internet radio services that are available on cars.

In addition to that, Nissan explained that the availability of the iTunes Radio on some of its models will allow the users of Apple iPhones, iPod Touch, iPad, Mac, Apple TV and Mac PC to listen to listen to their favorite music while on board the said Nissan vehicle models.

Apple has also explained that with such feature, the user of their products are not required to sync their gadgets into the vehicle’s audio system since all of the stations that are available on the iTunes radio are stored in iCloud. Given such setup, the user can easily can conveniently stop playing a specific station in one device and pick it up in another device.

Aside from providing its customers with an all-new feature, Nissan is also confident that the availability of the iTunes Radio in some of its models will also attract more buyers to prioritize the vehicles that they are selling over those of their closest rivals. In addition to that, Nissan also sees this event as an opportunity to take advantage of the popularity of Apple products on the younger generations so as to encourage them to purchase a Nissan vehicle whenever they decide to shop for a new car.

Finally, Nissan explained that the availability of Apple’s iTunes Radio will most likely be availed on the Nissan Rogue first while the other models particularly the Versa Note and the Leaf will follow afterwards.