Scion to Introduce Touchscreen Audio System to its Lineup 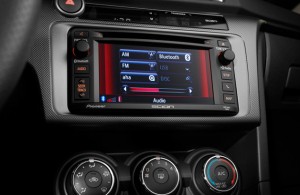 As part of its goal to improve its image and continue to attract younger buyers, Scion has finally confirmed that the company has decided to introduce a new touchscreen system not only on several models but in its entire lineup.

Based on the information obtained from the carmaker, all of the models that are included on the company’s 2014 vehicle lineup will be equipped with the Scio Display Audio System as part of standard features. The automaker also explained that the system comes with a 6.1-inch LCD Touchscreen, hands-free phone capability, AM/FM/CD/HD radio, music streaming through Bluetooth wireless technology and an auxillary/USB port that features iPod connectivity.

Scion has also shared that aside from the base audio system, some of the all-new Scion models will be offering the Scion BeSpoke Premium Audio system that features Aha. The upgraded audio system comes with the GPS navigation services, popular social media applications integration, access to about 30,000 free audio stations by using compatible smartphones and access to the carmaker’s own station that features a lineup of 17 music channels. However, Scion has stressed that since the BeSpoke Premium Audio system is an optional item, this will be available with an MSRP of $1,198.

Aside from sharing the information regarding the upcoming touchscreen audio system that all of the 2014 models of Scion would be getting, the carmaker has also revealed a number of important details of its upcoming cars such as the 2014 xD.

According to Scion, the 2014 version of the xD will hit the market with the Standard Display Audio and the all-new two-tone color options composed of the Magnetic Gray Metallic/ Black Sand Pearl and the Sparkling Sea Metallic/Classic Silver Metallic. Scion has also revealed that the 2014 version of the xD will go on sale in the month of September. The 6-speed automatic transmission-equipped model will have an MSRP of $25,800 while the 6-speed manual transmission-equipped version will be sold with an MSRP of $24,700.

Given such revelations, many car experts are expecting that Scion would most likely attract a lot of new buyers particularly the younger ones given that the features provided earlier are quite attractive to the younger generation.

Marty Bay is the Lead Writer and Editor for VPM Automotive. He has researched and reviewed 100s of cars, and writes extensively about car technologies.
Follow Marty Bay on Google+
This entry was posted in Car Technology, Scion. Bookmark the permalink.