Toyota to Introduce a Hydrogen Fuel Cell Car Model in 2015 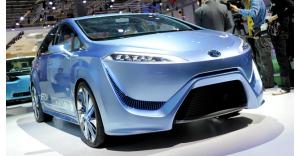 Amidst everyone belief’s that it has given up its intention of building a hydrogen fuel cell-powered vehicle model, Toyota has recently surprised the consumers as well as a lot of car experts that the company is indeed committed to launch such type of vehicle in 2015.

According to a reliable source from within Toyota, the Japanese carmaker is still committed to its intention of emerging as one of the active players in the US automotive industry who continuously spend its time in looking for alternative sources of energy that would someday allow the industry to detach itself from the dependence on fuels that are derived from petroleum.

In order to back this claim, Toyota has recently announced that the company is actually planning launch as hydrogen fuel cell-powered car in the market sometime in 2015. However, the Japanese carmaker was quick to announce that the vehicle model that the company intends to launch by 2015 is still undergoing the needed evaluations so as to make sure that this will be able to deliver the performance which is usually expected from a normal car to provide.

But despite of the hints that the upcoming hydrogen fuel cell-powered car is still undergoing the needed evaluations, it was recently known that Toyota is preparing for the launch of the production-ready version of the 2011 FCV-R study which is scheduled to be presented on the Tokyo Motor Show in November of this year.

Aside from revealing the company’s plan, the same source which is quite familiar with the development of the FCV-R study revealed that the upcoming model will be using the upgraded version of the Hybrid Synergy Drive system which is presently used on the current version of the Toyota Prius. In addition to that, the source has also revealed that instead of using the conventional petroleum engine, the FCV- R study makes use of a fuel cell along with a fuel tank and tanks that contain the high-pressure hydrogen. Aside from that, the upcoming model will also be using the same electrical components used on the Prius together with the 21-kW battery which is responsible for storing the energy which is recovered from the vehicle’s regenerative braking.