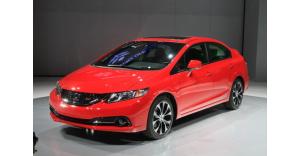 The 2013 Honda Civic has recently earned the “Top Safety Pick Plus (TSP+)” designation for the Insurance Institute for Highway Safety or IIHS.

Although most of the vehicle models in the market were able to obtain the Top Safety Pick Plus Designation or TSP+ from the Insurance Institute for Highway Safety (IIHS), the case of the 2013 Honda Civic which is offered in coupe and sedan variants is considered unique since the Civic was the first compact car to achieve such.

Due to such recognition, the 2013 Honda Civic has proved that despite of its relatively smaller size it is still capable of providing the needed safety features that would secure the vehicle’s driver as well as the other car occupants in the event of accident or collision.

Chuck Thomas, Honda’s chief engineer who is in charge of vehicle collision safety pointed out that the impressive safety rating obtained by the 2013 Honda Civic was basically caused by the company’s use of the second-generation ACE body structure of the ACE II. He also explained that the vehicle has also obtained a number of structural changes and all of these have contributed a lot in making the Civic as one of the safest compact car models in the market.

In addition to this, the overall safety feature of the 2013 version of the Honda Civic has also benefitted from the use of higher-strength materials and additional components that are capable of absorbing more energy during a crash.

Prior to the tests conducted by the IIHS, the 2013 Honda Civic has also obtained the “5-star” overall safety rating from the federal government.

Given these ratings and recognitions, a lot of car experts believe that the current version of the Honda Civic will most likely enjoy a significant increase since many compact car buyers will surely consider this as their top vehicle option knowing that Civic is safer as opposed to some of its closest rivals.