2013 Kia Optima Recognized as the International Car of the Year 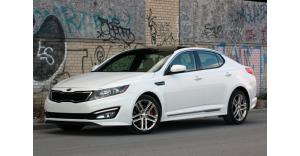 Kia Motors America or commonly known as KMA proudly announced at the 2013 North American International Auto Show that the 2013 Kia Optima was named by Road and Travel Magazine as the International Car of the Year (ICOTY).

Based on the announcement made by KMA, the fully-redesigned version of the Kia Optima obtained the recognition and was able to emerge as the top contender for the prestigious recognition since the vehicle was introduced with a very attractive design plus a lot of modern amenities as well as a very impressive value.
Prior to this recognition, the 2013 Kia Optima has already emerged as the top-selling vehicle that KMA has been selling in 2012 and this was basically due to the impressive characteristics of the model that was mentioned earlier.

The search for the ten winners of the International Car of the Year (ICOTY) award that was eventually dominated by the Kia Optima to is conducted by Road and Travel Magazine regularly and this is open to all existing and new car models in the market. The magazine selects all of the qualified models and evaluates each of these based on the established emotional connection between the vehicle and the consumer.

The selection of the winners of the ICOTY award is conducted by a number of juries that were tapped by Road and Travel Magazine. These juries are made up of renowned automotive journalists who are working for several respected and prestigious publications such as Consumer Guide Automotive, MSN Autos, and Car and Driver.

According to Road and Travel Magazine’s Editor-in-Chief Courtney Caldwell, the sleek design and the high-tech features that easily intertwined with the different lifestyles of the consumers who were able to purchase the vehicle were basically the most significant factors that triggered the 2013 Kia Optima to rise on the magazine’s ICOTY list.

Caldwell has also hinted that the juries have found out that the 2013 Kia Optima was the most “emotionally compelling” model that was included on this year’s ICOTY list and this was somehow responsible for allowing KMA’s vehicle to bag the prestigious award.

During the announcement, Michael Sprague who is the executive vice president of marketing and communications of KMA noted that the Korean carmaker was thrilled that the Kia Optima which happens to be the company’s current best-selling model has obtained the distinction given by a prestigious entity such as the Road and Travel magazine. Sprague has also revealed that the latest version of the Kia Optima continues to attract more buyers by offering an attractive design, long list of modern features, and by maintaining the company’s impressive value proposition.

Marty Bay is the Lead Writer and Editor for VPM Automotive. He has researched and reviewed 100s of cars, and writes extensively about car technologies.
Follow Marty Bay on Google+
This entry was posted in Kia, Optima. Bookmark the permalink.