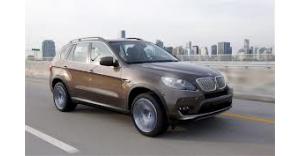 BMW has recently revealed the 2014 version of its X5 and based on the vehicle’s looks, it is quite clear that the changes made on the vehicle obviously evolutionary rather than legendary.

Based on the accounts obtained by the individuals who were able to take a closer look at the 2014 BMW X5 when the vehicle made its official debut, the upcoming version flaunts an exterior appearance that blends the features found on the current version, some of the BMW X3’s details and most of those that are found on the BMW 3-Series sedan.

The same set of sources have also shared that the 2014 BMW X5 has inherited the “connected headlamp” which is also used on the 3-Series and this was installed on the X5 along with BMW’s distinctive kidney grille. Aside from that, the vehicle’s 4 headlamps are now surrounded by LED accent rings. In addition to that, the X5 now has the LED fog lamps that were installed below the new headlamps.

In an attempt to further improve the X5’s aerodynamics, BMW decided to use its uniquely-designed air curtains on the vehicle. These air curtains are responsible for redirecting the air around the vehicle’s wheel arches thereby making this more aerodynamic. Aside from that, the 2014 BMW X5 is also equipped with the “air breathers” that are found on the side of the vehicle’s front fenders.

Under the hood, the 2014 BMW X5 will be equipped with the company’s 3.0-liter Twin Power turbocharged inline-6-cylinder engine which is capable of cranking up to 300 horsepower and 300 lb.-ft. of torque. BMW revealed that the engine will be used to power the rear-wheel drive sDrive35i and the all-wheel drive xDrive35i.

The 2014 BMW X5 xDrive50i on the other hand will be powered by a 4.4-liter twin-turbocharged V8 engine that uses the company’s Valvetronic variable timing. The engine is capable of cranking a maximum power output of up to 445 horsepower and 480 lb.-ft. of torque.