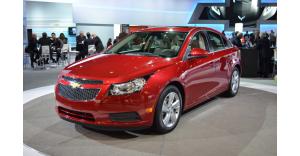 Chevrolet has recently unveiled 2014 Cruze Clean Turbo Diesel, one of the newest versions of the hottest-selling Chevrolet Cruze sedan.

According to Chevrolet, the 2014 Cruze Clean Turbo Diesel which will go on sale all over the US and in Canada in the later parts of summer is expected to provide the highest highway fuel economy rating among non-hybrid cars that are sold in America.

Aside from that, the carmaker has revealed that the 2014 Chevrolet Cruze Clean Turbo Diesel will feature a 2.0L turbo-diesel engine. With this engine, the Cruze Turbo Diesel is expected to meet the stricter environmental standards such as the “Tier 2 Bin 5 emissions standards” implemented by the US federal government since the clean diesel engine used on the vehicle was designed to produce emissions that contain 90% less Nitrogen Oxide and particulate compared to those that are generated by the previous diesel engine versions used on the Cruze.

Chevrolet also explained that the 2014 Chevrolet Cruze Clean Turbo Diesel with its 2.0-liter turbo-diesel engine is capable of producing a SAE-certified maximum power output of up to 151 horsepower and 264 lb.-ft. of torque.

Marty Bay is the Lead Writer and Editor for VPM Automotive. He has researched and reviewed 100s of cars, and writes extensively about car technologies.
Follow Marty Bay on Google+
This entry was posted in Chevrolet, Cruze. Bookmark the permalink.