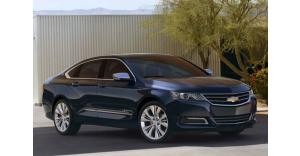 Chevrolet has already confirmed that the 2014 Chevrolet Impala will not only be reinventing the image of the brand’s flagship sedan when it hits the market this spring but the vehicle will also feature the next-generation version of Chevrolet’s infotainment which is popularly known as the “MyLink.”

Based on the information stated on the press release published by Chevrolet last November 17, 2012, the next-generation MyLink infotainment system will make its first official debut on the 2014 Chevrolet Impala.

The press release has also revealed that the next-generation MyLink system was designed as a highly-customizable device, to provide a more manageable operating experience, and capable of linking up to 10 different devices.

Aside from the characteristics that were mentioned earlier, the next-generation MyLink will also become the first infotainment system in the automobile industry to use the natural language voice recognition system. This system is very helpful this allows the driver or the other car occupants in making calls, play music, browse media, control the other functions of the vehicle by just literally telling the system on what to do.

In addition to this, the new version of the MyLink is also capable of storing some information such as destinations, music and other media, and contacts.

When asked to comment about the technology, Nina Mital who is the current program manager of the next-generation MyLink highlighted that the system was designed to provide the brand’s customers who are interested in purchasing the 2014 Impala with a new and total driving experience. Mintal has even hinted that the next-generation MyLink will also allow the driver to have a conversation with the vehicle through the voice recognition function.

Compared to the previous versions, the next-generation MyLink infotainment system was designed with a configurable integrated center stack and instrument cluster. Through this set-up, the system provides the customer with the ability to directly display the infotainment’s controls without the need to view the center. The microphone which is mounted above ensures that the voice commands issued by the driver are heard by the system.

Aside from the 2014 Impala, Chevrolet has also hinted that the next-generation MyLink system will also be used on the other 2014 models such as the Corvette and the upcoming full-size SUVs and trucks.

Marty Bay is the Lead Writer and Editor for VPM Automotive. He has researched and reviewed 100s of cars, and writes extensively about car technologies.
Follow Marty Bay on Google+
This entry was posted in Chevrolet, Impala. Bookmark the permalink.