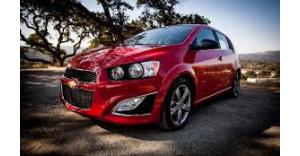 Chevrolet confirmed that the 2014 version of the Sonic will now be offered with two limited-edition colors that are dubbed as the “Deep Magenta” and the “Cool Blue.”

Based on the information obtained from the Chevrolet, the move to add the two limited-edition colors on the 2014 Chevrolet Sonic was basically brought about by the carmaker’s continued efforts in scouring new design products for its “individualists” consumers.

Aside from the Deep Magenta Metallic, Chevrolet will also introduce the “Cool Blue” which is a greyish dirty blue color. This will be available from the month of November of this year until March next year. It was also known that this will be followed by the “Dragon Green” in the first quarter of the upcoming year but this color will then be permanently added to the Sonic lineup for 2014.

The magenta-colored Sonics on the other hand will be hitting the market in the month of August of this year and will be available until the month of October of the current year.

Chevrolet also hinted that the 2014 Chevrolet Sonic with the magenta color will be sold at a starting price of $18,585 including the destination charge of $825. The Sonic will also be offered with a package that includes Deep Magenta color together with a sunroof, foglamps and MyLink radio. However, opting for this package would lead buyers to spend an additional $990. In addition to that, the package also requires the buyer to go for the 2014 Chevrolet LT.