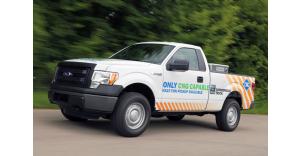 Ford Motor Company confirmed that a version of the 2014 Ford F-150 that would run on Compressed Natural Gas or CNG is about to debut this fall.

Based on the information provided by the US carmaker, they would be offering a variant of the 2014 Ford F-150 which is equipped with a gaseous-prep package that allows the vehicle to run using liquefied petroleum gas (LPG) or compressed natural gas (CNG). Given this move, many car experts are expecting that the CNG or LPG-powered version of the F-150 would further boost the options for pickup truck buyers who prefer to purchase the versions that run on alternative fuel.

Ford explained that the option that enables the F-150 to run using CNG will be available on the model which is powered by a 3.7-liter V6 engine. The carmaker also stressed that LPG/CNG prep package for the F-150 actually costs about $315.

After opting for the LPG/CNG prep option, the customer will then be allowed to choose any of the Ford Qualified Vehicle Modifier to provide the fuel lines, fuel tanks and the uniquely-designed fuel injectors. Ford estimated that the upgrade on the engine in order for this to run on CNG or LPG will most likely cost about $7,500 to $9,500. The additional costs vary according to capacity of the fuel tank selected by the customer.

Ford estimates that when an F-150 is equipped with the LPG/CNG engine package, this is expected to run a distance of more than 750 miles on a single full tank.

Marty Bay is the Lead Writer and Editor for VPM Automotive. He has researched and reviewed 100s of cars, and writes extensively about car technologies.
Follow Marty Bay on Google+
This entry was posted in Car Technology, F-150, Ford. Bookmark the permalink.