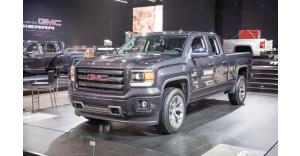 The 2014 GMC Sierra and the Chevrolet Silverado has once again obtained one of the most important safety recognition that most pickup trucks are expected to obtain by getting the National Highway Traffic Safety Administration’s five-star overall safety rating.

According to the information provided by the National Highway Traffic Safety Administration (NHTSA), the 2014 version of the GMC Sierra and the Chevrolet Silverado excelled in all of the federal crash tests wherein they were subjected. The agency has also hinted that both models did not only pass each test but earned the highest scores that they could provide.

Aside from getting the highest rating that the NHTSA could provide, the agency has also confirmed that the 2014 Chevrolet Silverado 1500, High Country, GMC Sierra and the Sierra Denali 1500 were the first pickup truck models that were able to obtain the highest rating that the NHTSA provides for the vehicles that they subject to tests. Thus, it is quite correct to conclude that the truck models mentioned earlier has somehow trumped most of its closest competitors particularly the Toyota Tundra, Ram 1500 and the 2013 Ford F-150 in terms of safety.

When asked to comment about the latest accomplishment that the 2014 GMC Sierra and the Chevrolet Silverado, Gay Kent who is the current general director of GM’s vehicle safety and crashworthiness division stated that the company was not surprised with the results of the tests since the carmaker knows that vehicle safety is one of the most important aspects that truck buyers are taking into consideration when they purchase their trucks. He even hinted that this was also the main reason why GM has equipped the Sierra and the Silverado with the most up to date safety features that the company could offer.

Many car experts were also convinced with Kent’s statement since most of them have known that the Sierra and the Silverado were built with fully boxed frames and GM’s vehicle developers utilized the extensive use of high-strength steel in building both trucks. In addition to that both of these models are equipped with safety features such as safety alert seat, forward collision alert and lane departure warning system that helps them avoid collisions or crashes.

Marty Bay is the Lead Writer and Editor for VPM Automotive. He has researched and reviewed 100s of cars, and writes extensively about car technologies.
Follow Marty Bay on Google+
This entry was posted in Chevrolet, GMC, Sierra, Silverado. Bookmark the permalink.