2014 Honda Ridgeline to get a Special Edition Model 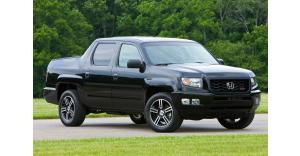 Due to the company’s decision to subject it to a major overhaul in 2016, the Japanese carmaker confirmed that the 2014 Honda Ridgeline would most likely hit the market unchanged but hinted that a special edition model will also be introduced within the lineup.

Based on the information obtained from the Japanese carmaker, the special edition model of the 2014 Honda Ridgeline will be this year’s to-of-the-line trim of the current lineup. The carmaker also announced that the Special Edition model will be added to the lineup in the month of November of the current year. Given its designation as the range-topping model, many car experts believe that the Special Edition version of the Ridgeline will probably become the most expensive variant.

Aside from confirming the entry of the Special Edition model into the 2014 Ridgeline lineup, Honda has also revealed that this version will embody a number of special features that were uniquely allotted to it. These include the 18-inch aluminum alloy wheels that are equipped with black-trimmed spokes, the famous Black trim package which is also offered on the Sport trim of the Ridgeline and the special badging which is exclusively offered in it.

But despite of the fact that the Special Edition model has a lot of exclusive features offered in it, Honda stressed that this version still looks like its other siblings. Given this statement, it is quite rational for the consumers to think that the Special Edition model is still a closed-box truck. In addition to that, this will also come with a passenger cabin which is capable of accommodating up to five passengers, a car-like handling as well as ride and will feature an independent suspension in front and on the rear.

Unlike the Special Edition model, the other existing models included on the 2014 Honda Ridgeline lineup were already offered on sale in the market last September 5, 2013. Honda has also confirmed that such models will be offered in different MSRPs. However, the carmaker explained that the starting price of the base model will start at $29,575 but this is expected to go up as the trim level increases.

Marty Bay is the Lead Writer and Editor for VPM Automotive. He has researched and reviewed 100s of cars, and writes extensively about car technologies.
Follow Marty Bay on Google+
This entry was posted in Honda, Ridgeline. Bookmark the permalink.