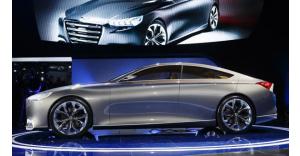 The 2014 Hyundai Genesis is considered as one of the most likeable car models in the market right now since this offers a mixture of luxury style and performance.

Such notion was recently proven to be true. This is because a lot of car experts were already able to take the 2014 Hyundai Genesis to a series of test drives. Most of these experts were not only impressed with the vehicle but many of them were quite stunned with the innovations that Hyundai has implemented on the Genesis.

According to the actual experience shared by a reliable source, the 2014 Hyundai Genesis is equipped with an interior design that could somehow match those that are offered in most Mercedes Benz car models. In addition to that, the Genesis according to same source could actually boast of its simple yet elegant cabin. The vehicle’s interior appearance is further enhanced by the presence of logical buttons and control placement.

Aside from that, the source was also pleased with the Genesis’ seats since these are made of perforated leather. Such seats were also heated and cooled. Thus, these seats actually offer an impressive amount of comfort not only to the passengers in front but also to those that are seated on the rear.

In addition to the stunning interior, the 2014 Hyundai Genesis also lives up to the expectation that it is indeed fun to drive. This is because the driver’s seat comes with the two memory settings. Larger drivers will also not find any issue in exiting and entering the vehicle since the Genesis is equipped with a power-tilt-and-telescoping steering wheel that was designed to power up and away.

Under the hood, the 2014 Hyundai Genesis is powered by 5.0-liter V8 engine that comes with a dual Continuous Variable Valve Timing. The engine is capable of producing a maximum power output of up to 429 horsepower and this make the Genesis an essentially powerful car. Aside from the strong engine, any buyer will surely enjoy the performance provided by the vehicle’s 8-speed automatic transmission. This is because the transmission features the Shiftronic function that allows the driver to do the shifting manually.

Marty Bay is the Lead Writer and Editor for VPM Automotive. He has researched and reviewed 100s of cars, and writes extensively about car technologies.
Follow Marty Bay on Google+
This entry was posted in Genesis, Hyundai. Bookmark the permalink.