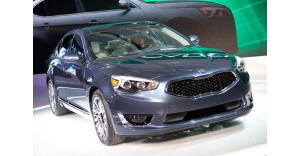 The 2014 Kia Cadenza was successfully unveiled at the 2013 North American Auto Show. The unveiling of the latest version of the Cadenza also marked Kia Motors America’s entry to the premium sedan segment.

KMA’s executive vice president of marketing and communications Michael Sprague hinted that the company’s move to enter the premium sedan segment in the US automobile market was actually triggered by the company’s realization of their customers’ growing need for a sedan which is equipped with upscale features and amenities.

Sprague has also explained that the company’s realization came when Kia introduced the top-of-the-line Optima SXL last year. Although the Optima SXL was equipped with some of the company’s advanced features and amenities at that time, most of the customers were still looking for a model that could offer more. Thus, Kia decided to produce the vehicle that they want and this was eventually in the form of the Cadenza.

When viewed in front, the latest version of the Cadenza is flaunting the company’s “Tiger Nose” fascia in front. In addition to this, the vehicle also flaunts a more grounded and stronger appearance which is further emphasized by its wider stance, larger wheels, broad shoulders, and contoured hood. The vehicle’s HID headlights and the LED taillights on the other hand were responsible for making the Cadenza look modernized.

Aside from the attractive exterior design, the 2014 Kia Cadenza is also sold with a sporty yet elegant interior design. This is equipped with soft leather upholstery and tasteful chore and wood accents. The vehicle’s interior appearance is further enhanced by its horizontally-positioned switchgear and the soothing ambient lighting.

When it hits the market, the vehicle will be powered by a 3.3-liter gasoline direct injection (GDI) engine which is capable of generating up to 293 horsepower and 255 lb.-ft. of torque. The power generated by the engine is seamlessly transmitted on its front wheels through the 6-speed automatic transmission which is equipped with paddle shifters and the Sportmatic manual shift mode.

Sophisticated and Elegant, Cadenza Represents the Most Technologically-Advanced Kia ever offered in the U.S. market

Marty Bay is the Lead Writer and Editor for VPM Automotive. He has researched and reviewed 100s of cars, and writes extensively about car technologies.
Follow Marty Bay on Google+
This entry was posted in Cadenza, Kia. Bookmark the permalink.