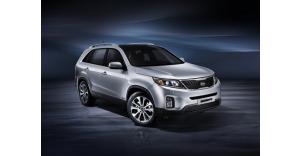 Based on the information provided by a number of reliable sources, the 2014 Kia Sorento was
a significantly redesigned version of its predecessors. These sources have also pointed out that
Kia did not only implement a facelift or just tweaked the vehicle’s feature. Instead, the company’s
engineers used a new chassis and added a new engine on the 2014 Kia Sorento lineup. In
addition to this, the upcoming version of the Sorento will also flaunt a redesigned interior and
obtained the company’s next-generation infotainment system.

Aside from the changes that mentioned earlier, the LX and EX 2014 Kia Sorento will be
powered by a new 2.4-liter GDI 4-cylinder engine as the replacement for the 2.4-liter MPI 4-
cylinder that was previously used on the said trims. The new engine is capable of generating up
to 191 horsepower and 181 lb.-ft. of torque. The new engine is currently admired by car experts
and buyers since this is very lightweight and still capable of providing the ample amount of
power needed by the vehicle.

The new 3.3-liter GDI V6 on the other hand is offered as standard engine for the EX V6, LX
V6, SX and the SX Limited and optional for the LX and EX trim. This engine is capable of
generating a maximum power output of up to 290 horsepower and 252 lb.-ft. of torque.

Both of these engines will be mated to a smooth shifting 6-speed automatic transmission. For
improved steering feel, the Sorento will also be introduced with the FlexSteer and the Electric
Motor Driven Power Steering.

The FlexSteer is a technology that provides the vehicle with three steering modes composed
of the Comfort, Normal, and Sport. This technology also allows the driver of the Sorento to
choose the steering mode which is suitable for the existing road conditions of the area where the
vehicle is driven. The Electric Motor Driven Power Steering on the other hand replaces the old
hydraulic power steering unit that was used on the 2013 Kia Sorento. Since this technology is
more advanced compared to the previous, buyers could expect that the 2014 Kia Sorento would
provide a livelier and more manageable steering performance.

Given all of the improvements enumerated above, Kia is quite confident that the 2014 Kia
Sorento would emerge as one of the best models in its class.