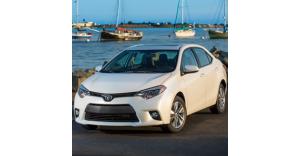 Toyota has finally revealed some of the significant features of the 2014 Toyota Corolla and such revelations came after a long period wherein consumers and car experts were of wondering as to what the vehicle would look like and how will it perform when driven on the street.

Based on the information obtained from the carmaker, a significant volume of the 2014 Toyota Corolla is currently being shipped from the company’s factories that are located in Mississippi and in Canada. This could simply mean that the latest version of the Corolla would soon hit the market.

But before the vehicle goes on sale, a number of reliable sources who were familiar with the model’s latest development have already leaked some of the information regarding the 2014 Toyota Corolla.

First off, the sources hinted that the latest version of the Toyota will only be offered as a sedan. When the vehicle hits the dealerships, this will be flaunting a handsome exterior design which comes with a new set of LED headlamps and a number of crisp folds that are quite similar to those that were seen on the Furia concept where the vehicle was based.

In addition to that, the 2014 Toyota Corolla sedan is expected to emerge as a quieter and smoother version of the model that it would be replacing. In terms of interior comfort, the upcoming version of the Corolla could also be considered as a top notch. This is because the latest model is mounted on a wheelbase which is about 3.9 inch longer than that of the outgoing model. Due to this extension, the latest version of the Corolla now provides more interior room. On top of that, Toyota has also improved the Corolla’s seats as well as most of its interior amenities to allow the vehicle to provide a more exciting environment for its occupants.

Under the hood, it was recently known that the L, LE and S trims of the latest Corolla will be powered by the same 1.8-liter twin-cam VVTi 4-cylinder engine which is expected to produce a maximum power output of up to 132 horsepower. The engine is also expected to be mated to new 6-speed manual transmission and a continuously variable transmission (CVT) that offers a “seven-speed” function.