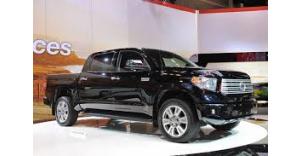 Toyota revealed the price of the 2014 version of the Tundra recently and the carmaker hinted that the company has implemented a few price adjustments on the entire lineup.

Although the price of the 2014 Toyota Tundra is relatively higher than that of the 2013 model, Toyota explained that the price adjustments that were implemented on the 2014 lineup of the Tundra has resulted to an overall average decrease in price amounting to about $263.

Toyota has also revealed that the 2014 Toyota Tundra will also be available in five-trim levels composed of the SR, SR5, Limited, Platinum and the 1974 edition. The carmaker explained that the top-of-the-line 2014 Toyota Tundra Platinum Crew Max as well as the 1974 edition will be sold at a starting price of $48,315 including the shipping charges.

Based on Toyota’s account, the 1974 edition of the 2014 Toyota Tundra will come with a western-inspired theme that includes the ultra-suede accents and the brown seating which is premium-leather trimmed and features the embossed leather. The Platinum trim on the other hand is equipped with premium leather seats that are perforated and diamond pleated. In addition to that, the Platinum also comes with chrome console accent and seat badging.

Aside from the features enumerated earlier, Toyota confirmed that the 2014 Tundra will also feature a standard back-up camera along with the Bluetooth.