2015 Cadillac Teaser Released Ahead of the Actual Unveiling Date 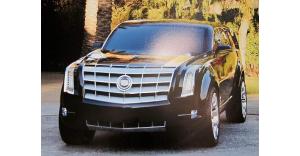 In the midst of a lot of incoming information regarding the arrival of a new version in the market and a tentative date wherein the new vehicle will be unveiled, Cadillac has recently released a teaser of a vehicle that most car experts expect as the 2015 version of the Escalade.

Based on the information provided by those who were able to see the teaser when this was released, Cadillac issued two images of the much-anticipated 2015 Escalade. The first image clearly shows the vehicle’s new headlight while the other tends to reveal its new badge. Due to the image that shows the design of the vehicle’s new headlight, many car experts were convinced that the upcoming version of the Cadillac will still stick to its bold look. The image of the new badge on the other hand made the experts believe that Cadillac will most likely be setting a number of upgrades on the vehicle to make this more attractive to buyers.

But aside from the images that were released by Cadillac, there are also a number of videos that were posted on YouTube. One of the videos runs for about 12 seconds and this basically shows a part of the car which is presented in clay form.