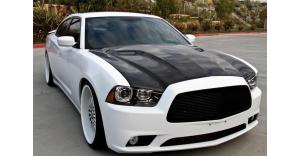 A lot of rumors have recently been circulating and each of these speculates that the redesigned 2015 Dodge Challenger will most likely obtain a Supercharged Hemi V8 engine.

Although Chrysler Group refused to comment on this issue, many car experts are expecting that rumors will eventually be proven true. This is because the upcoming version of the Dodge Challenger is in great need of an engine that will allow it to compete with some of its closest rivals particularly the Chevrolet Camaro ZL1, Ford Shelby GT500 Mustang and the Cadillac CTS-V.

Based on the information provided by a number of reliable sources, Chrysler Group is believed to be working on an engine which is capable of producing a maximum power output of up to 550 horsepower and this is currently codenamed as the “Hellcat.”

Based on such information, those who are well-verse when it comes to powerful engines immediately concluded that Chrysler Group might have been considering the use of 550-horsepower Supercharged Hemi V8 since this is the most potent choice that the carmaker could use on the upcoming version of the Dodge Challenger which is proven to generate the power output which is closer if not similar to what the engines of the Cadillac CTS-V, Camaro ZL1 and the Shelby Mustang are generating.

The same set of sources also claimed that they are expecting that Chrysler Groups might also use this supercharged engine in some of its upcoming versions of the Chrysler 300, Dodge Charger and the SRT Barracuda.

Despite of the lack of confirmation from Chrysler Group, these rumors continue to spread since many car journalists have noted that the carmaker badly needs to upgrade the engines that re used in its cars since the most powerful V8 engine that Chrysler has used so far 6.4-liter Hemi which is designed to generate up to 470 horsepower.

Marty Bay is the Lead Writer and Editor for VPM Automotive. He has researched and reviewed 100s of cars, and writes extensively about car technologies.
Follow Marty Bay on Google+
This entry was posted in Dodge. Bookmark the permalink.