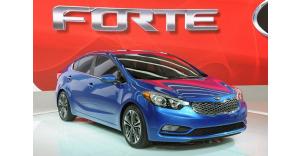 The 2014 Kia Forte is currently considered as one of the newest car models that were included on Kia’s present vehicle lineup.

Based on the information obtained from the Korean carmaker, the 2014 Kia Forte is an improved and more slippery version of its predecessor. The vehicle has received a lot of upgrades and all of these according to Kia were implemented to provide the Forte with a refreshed aura.

Starting off with its exterior, the 2014 Kia Forte shed its upright sedan and chop-topped coupe styling in exchange for a wider, longer, and lower design. This is also designed with a broader shoulder that provides the vehicle with a playful character. The hockey stick-style line found near the vehicle’s window sill gave the Forte with a more refined look. Due to such improvements, the 2014 Kia Forte is presently placed in line with the smaller Kia Rio and the larger Kia Optima.
Just like its exterior, the 2014 Kia Forte’s interior has also obtained a major upgrade. The vehicle comes with a driver-centric cabin with a long list of amenities and high-tech features. The vehicle is also sold with the company’s UVO eServices system which is powered by Google.

UVO offers a lot of services plus an in-car entertainment system which is free of charge for about ten years. Through this system, the owner could simply integrate UVO’s existing services as well as the available navigation system to his or her smartphone. The system also includes the 911 Connect which is a smartphone-based feature that could alert the appropriate authorities in the event of airbag deployment.

The 2014 Kia Forte is also offered with two engine options. The LX trim is powered by a 1.8-liter 4-cylinder engine with a multi-port fuel injection. This engine is capable of producing a maximum power output of up to 148 horsepower and 131 lb.-ft. of torque. This is mated to standard 6-speed manual transmission or an optional 6-speed automatic gearbox.

The other engine used in this model is the 2.0-liter 4-cylinder engine which is equipped with a more advanced direct injection technology and mated to a 6-speed automatic transmission. This is capable of generating a maximum power output of up to 173 horsepower and 154 lb.-ft. of torque. When powered by this engine, the 2014 Kia Forte could easily handle its overall weight which is about 2,857 pounds.