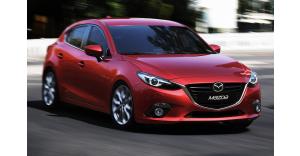 Mazda has finally revealed some of the important features of the 2014 version of the Mazda3 and such revelations somehow delighted many buyers who are interested in purchasing this.

According to Mazda, the 2014 version of the Mazda3 could be considered as a special model since this is one of the vehicle models that the company has recently been building that uses the so-called “SkyActive” technologies. Given this information, those who are interested in having the Mazda3 could expect that the vehicle could provide better fuel economy. In addition to that, Mazda has also explained that the 3’s weight was reduced by about 100 pounds so as to further boost its fuel consumption.

In addition to that, the carmaker has also shared that the 2014 Mazda3 will soon be marketed as a hatchback or a sedan. However, Mazda hinted that the sedan version of the vehicle will go on sale a month after the hatchback variant is released.

Under the hood, the Mazda3 i will come with a 2.0-liter 4-cylinder engine which is capable of producing a maximum output of up to 155 horsepower and return about 34 miles per gallon overall. The other version of the Mazda3 will also be powered by a 2.5-liter 4-cylinder SkyActiv engine which generates up to 184 horsepower and rated at around 32 miles per gallon overall.

Aside from the said engines, the 2014 Madza3 will also be sold with an all-new touchscreen infotainment system that features a jog-dial controller which is quite similar that of the iDrive used by most BMW cars. In addition to that, the new Mazda3 will feature an upgraded connectivity system which is capable of integrating Aha, Stitcher and Pandora audio streams into the vehicle by using a smartphone.

In terms of safety technologies, Mazda has also added a number of new amenities that were designed to aid the driver such as the radar-guided cruise control, lane departure warning, a heads-up display and automatic high-beam. The mid-level models according to Mazda will also come with the blind-spot assistance as their standard safety features.

Finally, Mazda revealed that the 2014 Mazda3 will go on sale in the month of September and a major redesign will probably take place after 10 years.

Marty Bay is the Lead Writer and Editor for VPM Automotive. He has researched and reviewed 100s of cars, and writes extensively about car technologies.
Follow Marty Bay on Google+
This entry was posted in Mazda, Mazda3. Bookmark the permalink.