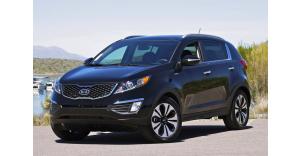 Kiahas recently subjected theSportage, the company’scompact crossoverwhich is sold in the US to a number of minor changes and all of these improvements are currently seen on the 2014 version of the vehicle.

Based on the information provided by a press release that was published on thecarmaker’smedia site dated September 13, 2013, the2014KiaSportagecould be considered as the product of the mid-cycle refresh that was implemented on the vehicle that has been around the US automobile market for almost three years now.

In order to provide the vehicle with a fresher look, thecarmaker’sengineers and vehicle developers installed a new grille on the2014KiaSportage, a particular feature that was intended to make the 2014 model look different compared to the model that it would be replacing. In addition to that, the new model particularly the EX trim now has a different set of foglamps that are responsible for allowing the 2014 version become distinguishable from the 2013 model.

In addition to that, the exterior styling ofKia’s compact crossovernow comes with a higher beltline, pronounced wheel flares and sweeping angles. With these features, thecarmakerexpects that its compact crossoverwill be viewed with a hunkered-down stance, aggressive and indomitable presence on the road.

For 2014 according toKia, theSportagewill be offered in LX, EX and SX trim levels. Given this information, it is quite clear that thecarmakerhas dropped the base trim on the current lineup and the manual transmission that was present of the previous lineup was also axed.

Althoughcarmakerhasn’t announced the exact pricing of the existing trims that are included on the compact crossoverlineup, many car experts believe that the prices of the upcoming models will still be cheaper than some of its closest competitors such as the Toyota RAV4 and the Chevrolet Equinox. Thus, theSportagecan be considered as a top pick for buyers with limited budget.

Finally,Kiahas also revealed that the company has revamped the base 2.4-liter inline 4-cylinder engine used on this compact crossover. The company’s personnel added a direct injection feature into the engine and this was responsible for bumping the engine’s maximum power output for 176 horsepower to 182 horsepower.