A Closer Look at the Corvette Stingray’s Configurable Gauge Cluster 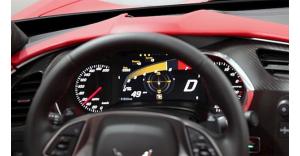 Chevrolet has recently shared a number of important points regarding the new and configurable gauge cluster which is presently used on the latest version of the Chevrolet Corvette stingray.

Based on a press release provided by Chevrolet, the current version of the Corvette Stingray features a state-of-the-art gauge cluster which is not usually found in other competitors. This considered as a revolutionary gauge cluster since this is built to provide up to 69 uniquely-designed sources of information which is very useful and at the same time entertaining for the vehicle’s driver.

The said gauge cluster is basically characterized by the presence of three analog gauges that provides the driver with the basic information regarding the vehicle’s speed, temperature of the engine coolant and the fuel level. However, Chevrolet’s goal to turn the Corvette Stingray into an extraordinary vehicle encouraged its vehicle to put something on the car that would make its look quite unique compared to its rival.

Due to such goal, the Stingray was eventually equipped with an 8-inch LCD display screen which is located in the center of the cluster. The display screen is organized into three themes composed of the track, tour and sport. Each of these themes was designed to be used in specific driving scenario and could be configured using the applications provided on the app tray. In addition to that, the theme could also be changed using the Driver Mode Selector.

A qualified personnel from Chevrolet has also explained that each of the theme on the LCD display screen was programmed to provide specific information. First off, the touring theme provides more emphasis on the multimedia and infotainment information. The sport theme highlights the information regarding the vehicle’s performance and this comes with a prominent shift indicator along with a larger radial tachometer. Finally, the track theme displays a layout which is obviously race-inspired layout that also contains a sweeping tachometer.

Aside from that, Chevrolet has also revealed that the unique gauge cluster also other configurable display features that were designed to help the driver realize the Stingray’s real capabilities. Among the most significant of these displays so far are the tire temperature gauge, acceleration timer and the lap timer.