A Closer Look at the Lexus LF-NX Concept 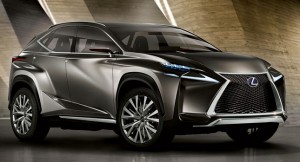 One of the most anticipated vehicle models that are scheduled to debut at the 2013 Frankfurt Auto Show is the Lexus LF-NX Concept. This is because many car experts are expecting to see what Lexus has done to this concept.

But prior to the Frankfurt Auto Show, Lexus has released a number of pictures that show some of the vehicle’s important aspects. Due to these, many car experts realized that the Lexus LF-NX Concept is not just an ordinary model but a relatively odd one which is basically shown on its interior.

Aside from the pictures, Lexus has also provided the public with a number of useful information that were intended to make the consumers fully understand as to why the premium carmaker decided to produce a vehicle that flaunts a unique if not odd exterior appearance.

According to Lexus, the production of the LF-NX Concept was basically brought about by the carmaker’s intention to introduce a new mid-size crossover model that would compete against the BMW X3, Audi Q5 and the Mercedes GLK.

With regards to the exterior design, Lexus explained that the current appearance of the LF-NX reflects the continuous evolution of the L-Finesse design language that the carmaker is trying to implement on most of its upcoming vehicle models. Unfortunately, Lexus failed to explain the reasons why the LF-NX Concept obtained such a weird look.

Although the vehicle looked a bit odd, Lexus boasted that the LF-NX Concept was carefully designed. The vehicle’s front is dominated by the carmaker’s spindle grille. In addition to that, the concept’s massive air intakes that are arranged vertically were responsible for separating its front bumper from its front wing. The concept is also equipped with the new set of headlights and a more aggressive version of the LED daytime running lights that are found on the new Lexus IS sedan. However, the abundance aggressive creases as well the presence of over-inflated wheel arches on the LF-NX concept made its smooth appearance look weird.

But despite of its comical exterior, Lexus takes pride of the vehicle’s aggressive interior design. In addition to that, the presence of carved metal surfacing inside the concept’s cabin was responsible for providing it with a cockpit which more focused on the driver.

Marty Bay is the Lead Writer and Editor for VPM Automotive. He has researched and reviewed 100s of cars, and writes extensively about car technologies.
Follow Marty Bay on Google+
This entry was posted in Lexus. Bookmark the permalink.