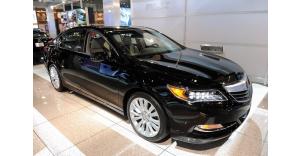 Acura has finally announced the latest pricing of the 2014 Acura RLX at the 2013 Detroit Auto Show.

The brand has also informed the buying public range-topping model of the 2014 Acura RLX which features the Advance package will be sold at a starting price of $61,345. Acura has also hinted that a 370-horsepower model of the RLX that will feature the brand’s newest Sport Hybrid Super-Handling All-Wheel-Drive technology will also be introduced into the market in the later parts of 2013.

Aside from that, the base model is also equipped with the so-called “four-wheel steering system” which is capable of adjusting to the angle of the vehicle’s wheels on the rear. The Sport Hybrid model of the RLX which is expected to hit the market in the later parts of 2013 will be propelled by a 3.6-liter V6 paired with dual electric motors that are readily integrated on the vehicle’s all-wheel drive system. The Sport Hybrid’s powertrain is believed to be capable of producing up to 370 horsepower and provide the estimated fuel economy ratings of 30 miles per gallon in the city and 30 miles per gallon on the highway.

Marty Bay is the Lead Writer and Editor for VPM Automotive. He has researched and reviewed 100s of cars, and writes extensively about car technologies.
Follow Marty Bay on Google+
This entry was posted in Acura. Bookmark the permalink.