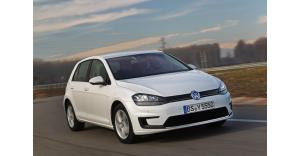 The all-electric version of the 2014 Version E-Golf is set to make its world debut at the 2013 Geneva Auto Show next month. However, a leak has prematurely revealed some of the vehicle’s features a few weeks prior to the E-Golf’s official debut.

Based on the information obtained from the sources of the leak, the 2014 Volkswagen E-Golf still looks like the conventional gas-powered version. This simply means that the E-Golf flaunts a low-profile appearance. However, those who are familiar with the gas-powered version of the Golf will most likely spot a few differences. This includes the model-specific bumper in front which is equipped with the C-shaped air intakes as well as the extra badges.

Aside from that, the E-Golf is about an inch lower than the conventional Golf despite of the fact that the latter is currently equipped with the low-rolling resistance tires.

The leaked information has also revealed that the all-electric version of the Golf is blessed with a touchscreen display and bespoke instrument cluster which incorporates the vehicle’s charge gauge. These amenities are mounted on the center stack which enables the driver to access the important information regarding the vehicle.

Finally, it has been known that the all-electric version of the Golf is equipped with three different driving modes. This simply means that the driver will be able to choose from Eco, Normal and Range modes. The Normal mode allows the vehicle to obtain a maximum range of 108 miles and run as fast as 83 miles per hour.

The Eco mode was designed to limits the vehicle’s engine output to about 95 horsepower and its speed to about 75 miles per hour. The Range mode restricts the E-Golf’s speed to only 59 miles per hour and automatically shuts the A/C down thereby preserving the energy exerted by the vehicle.

Marty Bay is the Lead Writer and Editor for VPM Automotive. He has researched and reviewed 100s of cars, and writes extensively about car technologies.
Follow Marty Bay on Google+
This entry was posted in Volkswagen. Bookmark the permalink.