Anti-Theft Devices Not a Deterrent for Thieves

You would think that all of the sophisticated anti-theft devices available today would leave car thieves looking for a new line of work. The fact is, auto theft is actually on the rise.

These higher theft rates in a time of increasingly sophisticated theft-deterrent systems suggests this extra equipment really is not worth the cost. But, some experts, such as Kim Hazelbaker, senior vice president of the Highway Loss Data Institute, and Ed Sparkman, an NICB agent, disagree.

According to Sparkman, theft-deterrent devices are more important these days because the NICB is predicting that theft rates will continue to climb and the chances of vehicle recovery will continue to fall. He feels this is largely due to the fact that police focus has shifted since the terrorist attacks of Sept. 11. Security of the country outweighs the loss of a citizens vehicle. And car-jackers take full advantage when the police have their attention elsewhere.

It is no surprise that some cars have a greater chance of being nabbed. According to the NICB, the Honda Civic was the most frequently stolen car in 2003. 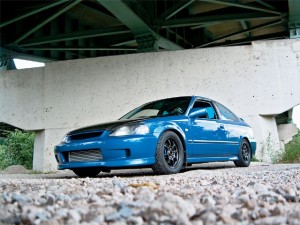 Another distinguishing factor is where you live. If you live in an urban area, a port city, or a town that borders Canada or Mexico, you should consider extra protection. The ten 10 cities, including surrounding counties, that had the highest number of reported vehicle thefts in the 2003

Starting with the highest:

The NICB reports that the total monetary loss for car owners and insurance companies because of vehicle theft comes to more than 8 billion dollars a year. This figure keeps rising due to the increase in the cost of cars and trucks. Car theft also costs the consumer more in the form of higher insurance premiums. Comprehensive coverage