Home > Car Advice > A8, Audi > Audi to Unveil Lighter and More Powerful A8

Audi to Unveil Lighter and More Powerful A8 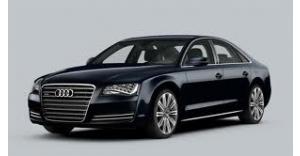 Audi confirmed that the company will be unveiling a lighter and more powerful version of the A8 at the upcoming Frankfurt auto show.

Based on the information provided by the German carmaker, the company’s move to unveil the new version of the A8 is expected to place Audi side by side with the other innovation leaders in the automobile market’s luxury class.

In addition to that, Audi revealed that the upcoming version of the A8 is mounted on a shorter wheelbase and has an estimated curb weight of 4,034 lbs. The carmaker also highlighted that the upcoming A8’s body was mostly made of aluminum and only weighs about 509 lbs. Given these characteristics, Audi expects that the A8 will emerge as one of the best all-wheel models in its class.

Aside from that, Audi has also explained that when the A8 hits the market, this will be sold with four engine options, two diesel and two gasoline engines. The first engine option according to the carmaker is the 3.0-liter supercharged TFSI V6 which is capable of producing a maximum power output of up to 310 horsepower.

Compared to the current models of the A8, the upcoming version will be flaunting a more sculptured hood and a more aggressive styling. In addition to that, the upcoming version of the A8 will be offered with the optional Matrix LED technology headlights. The said headlights are equipped with the high-beam function that uses 25 individual light-emitting diodes for every unit. These LEDS could also be switched on or off or deemed depending on the lighting needs of the environment where the vehicle is driven.

Marty Bay is the Lead Writer and Editor for VPM Automotive. He has researched and reviewed 100s of cars, and writes extensively about car technologies.
Follow Marty Bay on Google+
This entry was posted in A8, Audi. Bookmark the permalink.