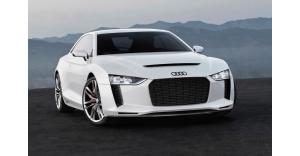 Audi has recently unveiled the Sport Quattro Concept which is set to make its official debut at the 2013 Frankfurt Auto Show.

In addition to that, some of the features of the current concept car were also influenced by the short-wheelbase-equipped Sport Quattro that previously took part in the rally racing and was able to set a new record in 1987 at the Pikes Peak Hill Climb.

Audi also revealed that the Sport Quattro Concept’s interior can be considered as one of the company’s best. This is because Audi’s designers spent a lot of effort and resources in order to provide the concept car with an attractive as well as usable design. The cabin appearance of the vehicle was also further enhanced by the presence of a lot of visible carbon fiber and sharp lines.

The German carmaker also explained that the Sport Quattro Concept’s body was also designed to accommodate four seats for the occupants. The concept car also offers a generous amount of cargo area which measures around 10.59 cubic feet. Aside from that, the concept’s body was also made of lightweight materials, a characteristic which is quite common among Audi cars.

In order to make the Sport Quattro Concept to become a vehicle which is fun to drive, Audi’s interior designer installed a number of controls that are focused on the driver. The most important information that driver needs are all displayed in an instrument cluster which is fully-digital.

Under the hood, the Audi Sport Quattro Concept is powered by a twin-turbocharged 4.0-liter V8 engine which is mated to an 8-speed Tiptronic transmission. The vehicle’s engine is also assisted by an electric motor that was shaped like a disk and a 14.1 kWh lithium-ion battery pack which is liquid-cooled. These power sources are capable of producing a combined maximum power output of up to 700 horsepower and 516 pound-feet of torque.

Marty Bay is the Lead Writer and Editor for VPM Automotive. He has researched and reviewed 100s of cars, and writes extensively about car technologies.
Follow Marty Bay on Google+
This entry was posted in Audi. Bookmark the permalink.