BMW Fully Reveals the Details of the 2014 i8 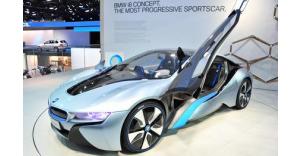 BMW has finally revealed the most important details of the 2014 i8, a vehicle which the company refers to as its newest plug-in hybrid sports car.

The German carmaker’s move in revealing the full specs of the 2014 BMW i8 came shortly after the company decided to announce to the public the most important details regarding its i3 electric supermini.

According to BMW, the 2014 i8 was built as 2+2 seater car. This will also come with the LifeDrive Architecture that was specifically developed for the BMW-i models. In addition to that, the i8 also features the so-called life module passenger cell which is made of carbon-fiber-reinforced-plastic or CFRP, high-voltage battery, drive system technology and a number of crash as well as structural functions that were integrated into the vehicle’s aluminum architecture.

In addition to that, BMW explained that the 2014 i8 is powered by a plug-in hybrid system which is consist of a 1.5-liter 3-cylinder twin-turbocharged petrol engine which is mated to a 6-speed automatic transmission, a synchronous electric motor and a 5 kWh lithium-ion high-voltage battery.

The carmaker stressed that the 1.5-liter 3-cylinder twin-turbocharged petrol engine is capable of producing a maximum power output of up to 228 horsepower and 236 lb.-ft. of torque. The engine is responsible for driving the i8’s rear wheels by sending the power it generates to such wheels through the automatic transmission. The synchronous electric motor on the other hand which generates up to 129 horsepower and 184 lb.-ft. of torque powers the vehicle’s front wheels with the help of a 2-stage automatic transmission.

Given the individual power output generated by its power sources, the i8 is actually capable of producing a maximum power output of 357 horsepower and 420 lb.-ft. of torque. With these figures, many car experts agree that the i8 actually has the power that would match its sports car appearance. Not only that, BMW shared that the i8 is also capable of accelerating from 0 to 62 miles per hour in just 4.4 seconds.

Aside from its impressive power sources, the i8 also takes pride of relatively lighter weight. BMW confirmed that the vehicle actually weighs about 3,285 pounds making it lighter than most conventional sports car models in the market.