Cadillac Unveiled the 2014 ELR at the 2013 Detroit Auto Show 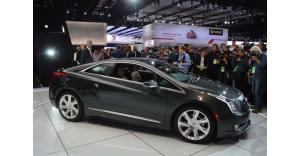 Cadillac has captured the attention of the crowd who attended the 2013 Detroit Auto Show when the popular brand unveiled the 2014 Cadillac ELR.

The crowd was amazed when they caught a glimpse of the sexier and quite upscale ELR which is considered as the high-end sister of the iconic Chevrolet Volt. However, most of them were actually electrified when they have determined the ELR’s true nature.

Based on the information shared by Cadillac during the debut of the ELR, the vehicle is classified as an extended-range hybrid car which is equipped with a gasoline engine, an electric motor, and a lithium-ion battery pack. Technically speaking, the 2014 Cadillac ELR is considered as a plug-in hybrid since this is propelled by the electric motor and the gasoline engine only serves as its backup.

Aside from its unique powertrain, the 2014 Cadillac ELR which flaunts a 2+2 seating configuration is also admired for its attractive look. According to Cadillac, the ELR took the exact look of the Cadillac Converj Concept that was unveiled earlier. Since this is a Cadillac, car buyers could expect that the ELR would project an upscale as well as a luxurious interior design.

Unfortunately, Cadillac has decided not to reveal the ELR’s pricing. This simply means that interested buyers still need to wait for the brand to announce the new plug-in hybrid’s pricing details. However, a lot of car experts believe that the 2014 Cadillac ELR will most likely be sold at a price which is relatively higher than the Chevrolet Volt.

Cadillac has also hinted that their preliminary tests conducted on the vehicle revealed that the ELR is capable of producing a maximum power output of up to 207 horsepower. The vehicle is also expected to provide a top speed of up to 100 miles while its total range while running on pure electric-mode is about 35 miles. Compared to the Chevrolet Volt, the 2014 Cadillac ELR’s maximum range is relatively lower than the former’s 38 miles. The ELR’s recharging time using a 120-volt charger is about 12 hours and 4.5 hours when a 240-volt charging station is used.