Chevrolet Demonstrates the Features of TuneIn at the CES 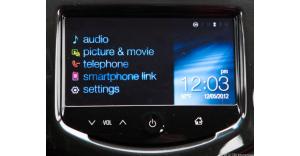 Chevrolet has brought “TuneIn” which is considered as the streaming audio power house at the CES to demonstrate its capability.

Based on the information obtained from Chevrolet, TuneIn will allow its consumers to gain access to a personalized and globally-functional infotainment system that could be controlled using the vehicle’s radio.

Through the use of TuneIn which is enabled by a specific smartphone app which is compatible with the MyLink radio found on the higher trim levels of the Chevrolet Sonic and Chevrolet Spark, vehicle owners could easily listen to their favorite radio stations in certain areas although they are currently in different locations.

For example, TuneIn could allow a customer who is currently residing in the Philippines to dial and listen to a particular radio station in the US with utmost ease. In addition to this, a customer from Japan could also access several a lot of radio stations in Europe and in different parts of the world. This is possible since TuneIn which is will be offered on the Chevrolet Sonic and the Chevrolet Spark is connected to a global radio network composed of about 70,000 radio stations.

During the demonstration, Chevrolet has stressed out that the TuneIn will only be available on their vehicles that are equipped with the MyLink radio such as the upcoming version of the Chevrolet Spark and the Chevrolet Sonic. In addition to this, the owners of the said vehicle models also need to download a TuneIn Radio app which is offered for free on compatible smartphone models in order to gain access to the features provided by TuneIn. However, Chevrolet has also reminded that not all smartphone models will be compatible with this app.

As soon as the app is downloaded and properly installed, the vehicle owners might start connecting their smartphones to MyLink Radio and access the internet, international, and local radio. In addition to this, the TuneIn users are also given the chance to search for different radio programs according to location, genre, and station type.

Marty Bay is the Lead Writer and Editor for VPM Automotive. He has researched and reviewed 100s of cars, and writes extensively about car technologies.
Follow Marty Bay on Google+
This entry was posted in Chevrolet, Sonic, Spark. Bookmark the permalink.