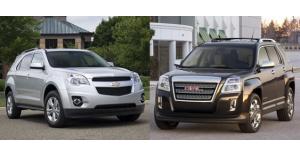 Chevrolet confirmed that the production of the Chevrolet Equinox and the Terrain has reached 1 million units since both of these vehicles were first introduced into the US automobile market.

Chevrolet’s confirmation came after a 2013 GMC Terrain Denali with a quicksilver metallic exterior color rolled off the vehicle assembly line at General Motor’s CAMI plant last week. This particular unit was actually the 1-millionth vehicle which is built on the platform used by the Chevrolet Equinox and the GMC Terrain.

The rolling out of the 1-millionth unit of the GMC Terrain Denali is considered as a significant event for Chevrolet and GMC since being able to produce one million units of a particular vehicle model or nameplate is regarded as an important milestone for every car maker or brand. This event also suggest that the Terrain and the Equinox are among the most in demand vehicles from the two brands since not all car models were able to reach 1 million units before their producers decide to halt their production.

The Chevrolet Equinox and the GMC Terrain are always associated with each other since both of these share a few similarities. They both share the same underpinnings and were introduced into the automobile market in 2009 both as 2010 models.

In the first nine months of 2012, General Motors continues to dominate the small SUV segment leaving some of its closest competitors such as the Honda CR-V, Ford Escape, and the Kia Sportage behind. Both of these models are currently sold as 2013 models. The latest versions of these vehicles are powered by a V-6 engine which is capable of producing a maximum power output of up to 301 horsepower.

Marty Bay is the Lead Writer and Editor for VPM Automotive. He has researched and reviewed 100s of cars, and writes extensively about car technologies.
Follow Marty Bay on Google+
This entry was posted in Chevrolet, Equinox. Bookmark the permalink.