Chevrolet Might Allow the Trailblazer to Come to US in 2014 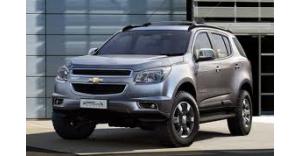 An industry source who requested to remain anonymous and is familiar with the product plans of Chevrolet recently revealed that the GM brand will most likely bring the Thai-built Trailblazer into the US in 2014 as part of Chevy’s expansion of its SUV lineup for the coming year.

Based on the information provided by the industry source, a version of the Chevrolet Trailblazer SUV is actually expected to hit the US automobile market sometime in 2014. However, the source failed to provide the details as to whether the said vehicle will actually be built in the US or if this will retain its name as the Trailblazer.

Given these information, a lot of rumors have recently circulated regarding Chevrolet’s exact plan with its SUV lineup expansion. But as a whole, many car experts believe that the Trailblazer-based vehicle will soon be available on most of the Chevrolet’s dealerships.

As rumors continue to spread, many buyers have started to become curious with what the Trailblazer looks like. What they don’t know is that the Trailblazer is a popular SUV model in several markets where this is sold. This is actually based on the global body-on-frame architecture that was also used on the Chevrolet Colorado, a pickup truck that was jointly built by General Motors and the Japanese carmaker Isuzu. Since GM and Isuzu shared their expertise in producing a reliable vehicle model which is the Colorado, the buying public could expect that the Trailblazer will most likely be as reliable as the Colorado.

The industry source has also hinted that Chevrolet will most likely launch the Trailblazer in the US since the consumers were already familiar with the vehicle. This is because Chevrolet has previously introduced the TrailBlazer with the capital “B” in its name in 2002 to serve as the replacement for the S10 Blazer. However, Chevrolet has decided to discontinue the TrailBlazer in the US in 2009 and replaced this with a front-wheel drive SUV which eventually became known as the Traverse.

But despite of the rumors regarding the possibility of the Trailblazer’s return to the US automobile market next year, Chevrolet continues to stick to its official statement which states that the brand has no plans of adding another SUV model in its portfolio.