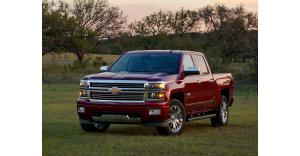 Prior to the vehicle’s actual release into the automobile market this fall, Chevrolet has finally announced the pricing information of the 2014 Silverado High Country.

Based on the information obtained from the carmaker, the price of the base version 2014 Chevrolet Silverado High Country will start at $45,010 including the destination charge of $995 while the top-of-the line High Country with the four-wheel drive and a long box will be sold at a starting price of $48,765 including the shipping charges.

The price of the base Silverado High Country actually reflects a difference of about $20,425 compared to the base model of the truck which is sold at a starting price of $24,585 including the cost of shipping. However, GM was quick to justify that the large difference in price between the two was basically triggered by the fact that the High Country is a special model and this is equipped with a number of features that are not found on the base model as well as on the Silverado variants that are included on the current lineup.

GM also revealed that the 2014 Chevrolet Silverado High Country is presently positioned on top of the LTZ trim which is the previous year’s top-of-the-line model. In addition to that, the carmaker shared that the High Country comes with unique and exclusive standard features such as the body-color bumpers in front and on the rear, a chrome grille, 20-inch chrome wheels, chrome body trim and halogen projector headlamps.

Inside, the High Country is equipped with bucket seats in front, saddle brown interior, premium audio system from Bose and the parking sensors in front and on the rear. This can also be had with the optional Premium package that costs about $1,345 but adds a heated steering wheel, adjustable pedals, integrated trailer brake controller and a driver-alert package. Aside from that, the vehicle is also sold with the optional sunroof and white diamond tricoat paint on its exterior that costs an extra $995.

The US carmaker also hinted that the 2014 Chevrolet Silverado High Country will compete with the 2014 Toyota Tundra 1794 Edition and the 2013 Ford F-150 King Ranch.