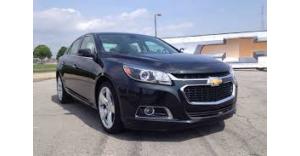 Chevrolet has always treated fuel efficiency as one of the most of important aspects of their vehicles and due to this the 2014 Chevrolet Malibu was tweaked to further improve its fuel consumption.

Based on the information that the US carmaker has shared with the public, the 2014 Chevrolet Malibu which will go on sale this fall is equipped with a new 2.5-liter 4-cylinder engine that makes use of the new start-stop and the new intake valve technology. Chevrolet has also revealed that both of these technologies were used on the new engine so as to further improve its fuel economy.

Many car experts believe that Chevrolet’s move to change the Malibu’s engine to improve the vehicle’s fuel consumption was most likely brought about by the ongoing fuel economy race that exists between the previous version of the Malibu and some of its closest competitors particularly the 2013 Honda Accord and the 2013 Hyundai Sonata.

Given the expected fuel economy ratings of the 2014 Chevrolet Malibu, it seems like the tweaks implemented by Chevrolet on the vehicle were not yet enough to beat the ratings posted by the 2013 Honda Accord and the 2013 Hyundai Sonata.