Ford Hooks Up with Glympse to Release Location-Sharing Technology 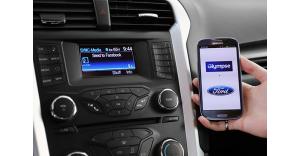 Glympse Incorporated which is known for pioneering the real-time location sharing has recently announced the availability of the first-ever location-sharing application that was designed for the SYNC-equipped vehicles that are produced and sold by Ford Motor Company.

According to a press release published by Glympse Inc. last January 7, 2013, the location-sharing app will allow drivers of SYNC-equipped Ford vehicles to share their locations to under individuals such as their friends and families directly from their own vehicles just by making the appropriate voice commands. This simply means that the driver could easily send the particular information to a selected number of individuals without the need to touch his or her mobile phone.

Glympse Inc. has also revealed that this particular app will only be available for Ford vehicles that are equipped with the SYNC in-car connectivity system and the AppLink interface. This app also works and requires an Android-based or iOS smartphone.

In order to subscribe to this service, all the driver should do is install the app on his or her smartphone. By the time that this is installed on the phone, the vehicle could now recognize the app as soon as the phone is connected to the car’s SYNC interface via USB or when Bluetooth paired.

When the Glympse app is activated, the driver is only required to press the voice button of the SYNC which is located on the car’s steering wheel and say the “Send Glympse” command. The driver and the car’s will then be sent to the friend or a family member’s mobile number, email address, Facebook, or Twitter account. Due this particular function, the driver’s family members or friends will determine his or her current location.

Aside from providing a convenient location-sharing service, Glympse could also be considered as a good safety feature of Ford vehicles since this is responsible for reducing the amount of distraction that the driver is getting. This is because Glympse allows the driver to reveal his or her location to others without the need to make a phone call or send a text message. Thus, the driver could maintain his eyes on the road while doing this.