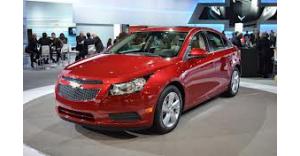 General Motors has confirmed that the diesel version of the iconic Chevrolet Cruze has recently received a lot of last minute improvements and surprisingly obtained a significant boost in fuel economy.

Although General Motors failed to reveal the details regarding the last minute improvements implemented on the Chevrolet Cruze diesel, the US carmaker confirmed that such upgrades were basically pointed as one of the most probable reasons for the sudden increase on the vehicle’s fuel economy ratings on the highway.

Given the latest and somehow accidental increase in the estimated fuel economy rating of the Cruze diesel on the highway, many car experts believe that General Motors is considering this vehicle as one of the company’s to priority since this the first diesel car sold by Chevrolet after the Chevette diesel in 1986.

Aside from confirming the 4 miles per gallon increase on the estimated fuel economy ratings of the Chevrolet Cruze diesel on the highway, General Motors has also revealed that this vehicle will gradually hit the US market this spring. The US carmaker has also confirmed that the Cruze diesel will be introduced first in 13 different markets such as in California, Baltimore, Boston, Washington D.C. and Oregon.

The Chevrolet Cruze diesel is expected to be sold at a starting price of $25,965 including the destination charge of $810. Given this price, the Cruze diesel is more expensive compared to the Volkswagen Jetta which is its closest rival by about $1,910.

Marty Bay is the Lead Writer and Editor for VPM Automotive. He has researched and reviewed 100s of cars, and writes extensively about car technologies.
Follow Marty Bay on Google+
This entry was posted in Chevrolet, Cruze. Bookmark the permalink.