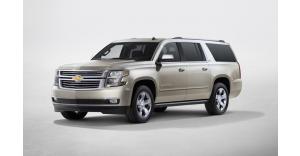 General Motors has recently revealed some of its upcoming full-size SUV models that the company’s Chevrolet and GMC brands would be selling with the 2015 model year attached to each of these.

Based on the information revealed by the US carmaker during the unveiling of the all-new 2015 Chevrolet Suburban and Tahoe along with their GMC counterparts composed of the 2015 GMC Yukon and the Yukon Denali, the production of these next-generation full-size SUV models will start in the first quarter of the upcoming year.

In addition to that, General Motors has revealed that the upcoming versions of such full-size SUV models will all be based on the company’s existing structure which is currently used on the 2014 Chevrolet Silverado and the 2014 GMC Sierra pickup trucks. The carmaker also explained that the full-size SUVs will also be powered by the direct-injected 5.3-liter as well as the 6.2-liter V8 engines that are also used on the 2014 versions of the Sierra and the Silverado.

In terms of their exterior looks, General Motors explained that the company’s engineers would be utilizing a careful as well as conservative styling theme for these SUVs. The vehicles will also feature sharper yet uncomplicated lines that are intended to improve the larger vehicles’ aerodynamics. In addition to that, those who were present during the event where the carmaker revealed some of the details of its upcoming full-size SUVs have seen that the new-generation versions were mostly equipped with a new spoiler that was installed on the rear hatch.

When it comes to the vehicles’ interior, General Motors hinted that the company’s interior designers will be using a lot of upgraded materials on the SUVs’ cabins and these would also be flaunting an all-new interior layout.

Marty Bay is the Lead Writer and Editor for VPM Automotive. He has researched and reviewed 100s of cars, and writes extensively about car technologies.
Follow Marty Bay on Google+
This entry was posted in Chevrolet, GMC. Bookmark the permalink.