Honda Prices the 2014 Accord Hybrid 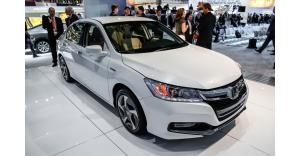 Prior to the vehicle’s actual selling date which is scheduled on October 31, 2013, Honda finally announced the pricing information of the 2014 version of the Accord Hybrid, the model that was intended to compete with the 2014 Toyota Camry Hybrid and the 2014 Ford Fusion Hybrid.

According to the information provided by the carmaker, the price of the 2014 Honda Accord Hybrid will start at $29,945 including the shipping charge of $790.

With this starting price, the 2014 Honda Accord Hybrid is considered as a more expensive option compared to its closest rivals that are the 2014 Toyota Camry Hybrid and the 2014 Ford Fusion Hybrid. This is because the 2014 version of the Toyota Camry Hybrid LE is priced at $26,950 including the destination charge of $810 while the 2014 Ford Fusion S Hybrid FWD is sold at a starting price of $26,995 including the destination charge of $795.

But despite of its higher price, Honda is confident that it is possible for the 2014 Accord Hybrid to outsell the two of its closest rivals since this has obtained the EPA-estimated fuel economy ratings of 50 miles per gallon in the city and 45 miles per gallon on the highway.