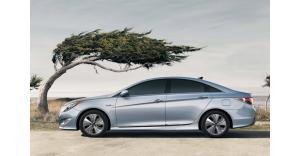 Hyundai has recently implemented a mid-cycle upgrade on the 2013 Hyundai Sonata Hybrid and this was designed to improve the vehicle’s overall features.

Based on the information shared by Hyundai, the 2013 version of the Sonata Hybrid will still look like the 2012 model. This is because the key updates that were conducted on the vehicle are confined beneath the hybrid’s sheet metal.

Hyundai has also revealed that the Hybrid Starter Generator of the Sonata Hybrid was upgraded. The changes made by the company’s engineers and those that were involved in developing the vehicle’s components increased the generator’s capacity 10.5 kW. The generator’s increased capacity allows it to accommodate greater charges and at the same time provide a seamless transition from electric to gas mode or vice versa.

To complement the upgrade made on the 2013 Hyundai Sonata Hybrid’s Hybrid Starter Generator, Hyundai has also fitted the vehicle with a lithium polymer battery pack which is good for 47 kW. The Korean carmaker has also stressed out that the new battery pack is more powerful compared to the older the version which is used on the 2012 model of the Sonata Hybrid since the latter is only good for 34 kW. In addition to this, the new lithium polymer battery pack is more compact and this allowed Hyundai to increase the vehicle’s trunk from 10.7 cubic feet to 12.1 cubic feet.

But despite of the upgrades made on the 2013 Hyundai Sonata Hybrid, Hyundai has decided to lower down its starting price to $25,650. Given the slight decrease on the sedan’s starting price, the potential buyers are given the chance to save about $200.

Marty Bay is the Lead Writer and Editor for VPM Automotive. He has researched and reviewed 100s of cars, and writes extensively about car technologies.
Follow Marty Bay on Google+
This entry was posted in Hyundai. Bookmark the permalink.