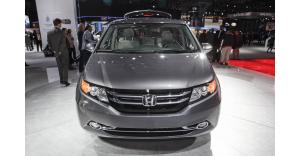 The2014 version of the Odysseywhich is produced by Honda has recently received the highest overall safety rating from the Insurance Institute for Highway Safety and became the only minivan model to receive the Top Safety Pick+ honors from the agency.

Based on the information provided by the Insurance Institute for Highway Safety(IIHS), the2014 Honda Odysseyhas earned the rating of “good” on the small overlap crash test which is considered as the highest mark. TheIIHSnoted that the2014 Honda Odysseywas able to obtain the highest mark for the said test since the evaluators discovered that the vehicle is now equipped with a modified version of the side curtain airbags and a strengthened steel frame.

Aside from that, theIIHShas also subjected the2014 Honda Odysseyto the new small overlap front crash test which is viewed as the most challenging of all the crash tests conducted by the agency. The test basically simulates the things that might happen when the vehicle’s left front corner hits different types of objects such as a pole, a tree or a car. Fortunately, the Odyssey has also aced such simulation and was also considered as the first model to undergo the small front overlap test.

The result of the small front overlap crash test revealed that the2014 Honda Odysseyis more resilient to frontal crashes compared before. Given this result,Hondawas quite satisfied with the upgrades that the company has implemented on the Odyssey particularly its use of high-strength wheelwells, front door frames and floor pan.

In addition to that,Hondaboasted that the vehicle’s new side curtain airbags was also more effective in providing better head protection in case of a small overlap front crash or a side crash since this was designed to extend further forward.

Although the 2014HondaOdyssey was not yet rated and subjected to the crash test simulations by the National Highway Traffic Safety administration, many car experts believe that the current recognition that was obtained by the vehicle from theIIHSwill surely help it stand out against its closest rivals such as the Nissan Quest and the Toyota Sienna.

Finally, getting the highest safety ratings from theIIHSmight also boost the Odyssey’s popularity and the reputation of Honda as well since a lot of minivan buyers usually consider vehicle safety as the most important aspect that they should look into when buying their next vehicles.

Marty Bay is the Lead Writer and Editor for VPM Automotive. He has researched and reviewed 100s of cars, and writes extensively about car technologies.
Follow Marty Bay on Google+
This entry was posted in Honda, Odyssey. Bookmark the permalink.