Increased Competition Encouraged Toyota to Retain the Prices of the Camry 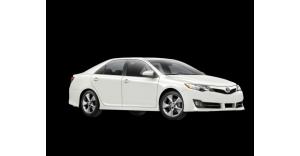 Toyota has recently confirmed that the company has to retain the prices of the current version of the Camry as well as increase the incentives offered on the model as a way to deal with the increasing competition.

According to several experts who are familiar with the ongoing trends in the segment where the vehicle belongs, Toyota has recently realized that retaining the prices of the existing trims of the Camry and at the same time boosting the incentives offered with these is the best way to retain the model’s bragging rights that claim that this is the best-selling car all over America.

In addition to that, the same set of experts have also pointed out that Toyota’s current move could also be considered as the company’s way of preparing for the possible effects of Ford’s ongoing plan of ramping up the production of the Fusion which is considered as one of the Camry’s closest rivals in the market.

Aside from such assumptions, there are also a number of car experts who believe that the retention of the prices of the existing trims of the 2013 Toyota Camry as well as the boosting the incentives offered on this was basically triggered by the fact that the Honda Accord and the Nissan Altima has already outsold the Camry in the month of March. Thus, these experts believe that such move was the company’s defense mechanism to combat the continuous increase on the market share that the Accord and the Altima are having.

But aside from retaining the prices of the Camry’s that are currently sold in the market, it was recently known that Toyota is also looking for other ways to boost the model’s sales and retain its claim as the best-selling car in America. Many reliable sources revealed that Toyota is also planning to add a number of technologies on the Camry so as to boost its image in the market as well as increase its sales output for the current year.

Finally, a number of sources revealed that Toyota would most likely double its efforts to come up with a redesigned version of the Camry so as to cope with the challenges posed by its newer competitors.

Marty Bay is the Lead Writer and Editor for VPM Automotive. He has researched and reviewed 100s of cars, and writes extensively about car technologies.
Follow Marty Bay on Google+
This entry was posted in Camry, Toyota. Bookmark the permalink.