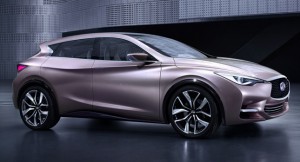 Infiniti has just recently unfolded the first image of the Q30 concept and such move was subsequently a lot of reaction from car experts and consumers.

Based on the statement provided by Infiniti, the release of the first image of the Q30 concept was the carmaker’s first move in fulfilling its goal of increasing the number of car models included in the brand’s lineup and as well as to solidify its presence in the premium market segment.

Upon unfolding the first ever image of the Q30, Infiniti has also revealed that the upcoming vehicle model is intended to attract the younger customers who subsequently seek for a worthy alternative to the conventional premium compact car models.

The carmaker also explained that the Q30 concept was not just an ordinary vehicle model. This is because the concept vehicle combines all of the significant characteristics of a number of body styles of the existing car models that are sold in the market. Infiniti also stressed that the Q30 concept will hit the market in a layout that fuses the sportiness of a traditional coupe, the relatively higher stance of a crossover and the roominess of a hatchback.

Given such characteristics, many car experts agreed that the Q30 concept is really not an ordinary vehicle. These experts were also aware that Infiniti will soon be revealing a long list of features that would most likely caught the consumers’ attention in the near future.

But aside from revealing some of the most significant traits of the Q30 concept, Infiniti has confirmed that this vehicle is set to make its official debut in September 10, 2013 at the Frankfurt auto show. The brand has also hinted that the production version of the Q30 concept will be built at the Sunderland, England plant owned by Nissan. This is expected to go on sale in 2015 and Infiniti plans to market the vehicle globally including the US.

In order to prepare for the entry of the Q30 concept to the company’s production line, Nissan finally decided to expand the annual capacity of its Sunderland plant from 500,000 to 550,000 units. As soon as the Q30 concept hits the market, this is expected to compete with the likes of the BMW 1-Series, the Audi A3 and the Mercedes Benz A-Class.

Marty Bay is the Lead Writer and Editor for VPM Automotive. He has researched and reviewed 100s of cars, and writes extensively about car technologies.
Follow Marty Bay on Google+
This entry was posted in Infiniti, Q30. Bookmark the permalink.