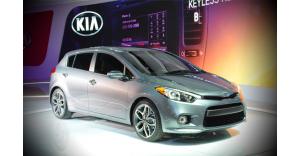 Kia Motors America stunned the audience at the 2013Chicago Auto Show when they unveiled the Kia Forte 5-door during the event.

Based on the information provided by a number of reliable sources, Kia Motors America (KMA) introduced the all-new Kia Forte 5-door SX. Upon taking the center stage, the all-new Kia Forte SX amazed a lot of car buyers and experts who were present in the event since the vehicle flaunted an eye-catching and European-inspired hatchback layout.

In addition to this, majority of the audience were impressed upon knowing that the vehicle is propelled by the all-new 1.6-liter GDI or gasoline direct-injected turbocharged 4-cylinder engine which is capable of producing up to 201 horsepower and 195 lb.-ft. of torque. Given the maximum power output that its engine is capable of producing, the Kia Forte SX is currently considered as the most powerful Forte car that KMA has released into the market.

Aside from unveiling the all-new Kia Forte SX, Kia Motors America has also presented the EX, the second trim that will complete the Kia Forte 5-door lineup for this year. According to KMA, the Kia Forte EX is powered by a 2.0-liter gasoline direct-injected (GDI) 4-cylinder engine which generates up to 173 horsepower and 154 lb.-ft. of torque.

KMA has also stressed out that although the Kia Forte EX does not generate as much horsepower and torque that the SX produces, the former will most likely appeal to a lot of buyers since the vehicle’s expected performance is still on par with some of the leading models in the compact car segment.

Aside from the powerful powertrains, a lot of car buyers and experts who were present at the 2013 Chicago Auto Show were also impressed with the Kia Forte SX and EX since both of these are also loaded with a long list of high-tech standard features such as the 16-alloy wheels (for the EX), 18-inch alloy wheels (for the SX), Kia’s UVO eServices plus a rear camera display, SiriusXM, Satellite Radio and Bluetooth.

In addition to this, the two trims of the all-new Kia Forte 5-door also comes with a tilt-and-telescoping steering column, LED headlights and foglights, and leather-wrapped steering wheel with the integrated cruise and audio controls buttons.

Finally, KMA has also hinted that the all-new Kia Forte 5-door will hit the market in the third quarter of 2013 and the pricing information of the SX and EX trims will be announced before the lineup’s actual launch date.

Marty Bay is the Lead Writer and Editor for VPM Automotive. He has researched and reviewed 100s of cars, and writes extensively about car technologies.
Follow Marty Bay on Google+
This entry was posted in Forte, Kia. Bookmark the permalink.